List of Netflix Shows With International Spin-offs on Netflix A growing trend in recent years is netflix making international spin-offs of some of its hit shows (predominantly reality TV shows) including the likes of Rhythm + Flow, Too Hot to Handle, and even drama series like Money Heist. Here’s our full list of shows netflix has spun off into international formats.

Few caveats before we dig into the main list.

We’re excluding Chef’s Table which did release a France spin-off series mainly because it’s more just a focus of coverage rather than a full-blown international spin-off. For the same reason, we’re excluding Street Food: Asia and Street Food: Latin America.

First released in 2017, Ultimate Beastmaster we believe is one of netflix’s most revolutionary shows (and could be one of its most important in the coming years – more on this in an upcoming post) in its history albeit it’s not well-known. It was one of the first-ever shows to launch with international versions simultaneously that all cover the same event albeit with different hosts that speak the language it was designed for (although they cover the same event). 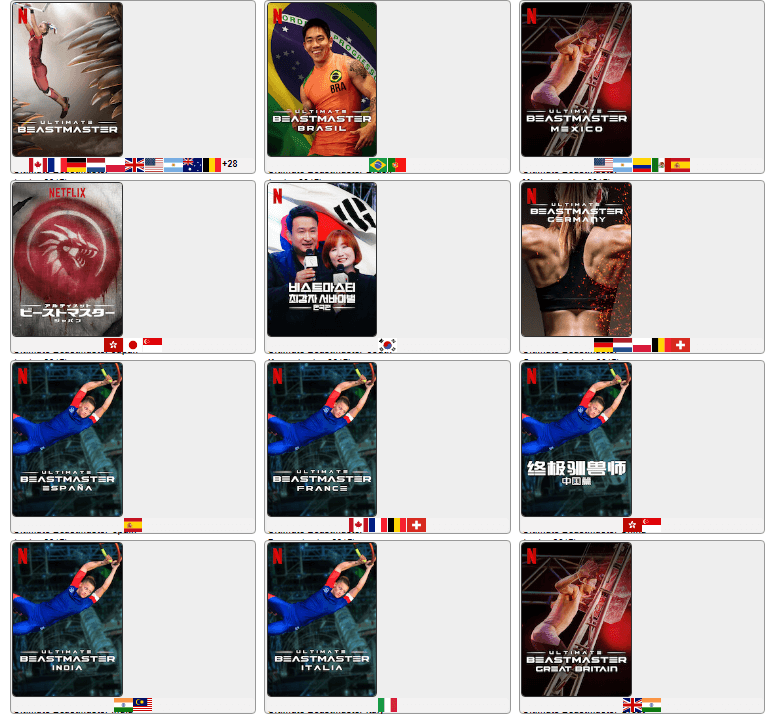 The series was an obstacle course style show (think American Ninja) that meets with the grandeur of the Olympics.

One of netflix’s biggest franchises to date, Money Heist hails from Spain and for its first international spin-off will come Money Heist: Korea – Joint Economic Area releasing globally in June 2022.

The series is set to follow the same beats as the flagship show with the same characters being portrayed on screen.

Hosted by Nicole Byer in the US, Nailed It! has been one of the most expansive shows to get international spinoffs since it first debuted in 2018.

Magic for Humans notably got a Spanish spinoff in March 2021 following three seasons of the main English language show that first premiered in August 2018.

Queer Eye has been one of netflix’s most successful shows when it comes to scooping up awards. The main English-language flagship show hosted by the Fab Five has gone onto release 6 seasons (plus a Japan spin-off) but in recent years, we’ve also seen multiple regional variations of the show.

Created by Christian Einshoj, Haunted was the pseudo-documentary series that recounts and re-enacts stories told by people who experienced horrric things.

Three seasons of the main English show have been released thus far and it got a Latin American version of the show released in April 2021.

An interesting case study this one as netflix doesn’t technically own either show or even developed but does distribute both as netflix Originals.

Designated Survivor began its life at ABC for 2 seasons before having the plug pulled with netflix then stepping in for the third (and what turned out to be the final) season.

The show then went on to receive a South Korean spinoff called Designated Survivor: 60 Days which starred Ji Jin-hee, Heo Joon-ho, and Kang Han-na which was released on tvN in South Korea and on netflix around the globe.

Among the iterations we saw released in 2019 included:

Criminal: UK was the only version of the show to get renewed for a second season with a third season yet to be announced.

French comedy series Call My Agent! began in 2015 and eventually came to netflix around the world over the years with four seasons produced in total.

Netflix then released an Indian spin-off of the show called Call My Agent Bollywood in October 2021.

A South Korean spin-off is also in development which is scheduled to air on tvN although it’s unclear whether that’ll come to Netflix.

Love Is Blind is yet another dating show that has received international spin-offs at Netflix.

The flagship US version of the show first debuted in February 2020 and has released two seasons so far and has been renewed through to season 5.

Two international spin-offs have dropped so far including:

The Circle was first pioneered by Channel 4 in the United Kingdom and Netflix picked up the rights to produce The Circle: USA which first debuted in January 2020. Since then, the main show has released 4 seasons and is renewed for a season 5.

Too Hot to Handle

The English language version of Too Hot to Handle, a dating reality show, first aired on Netflix globally in April 2020. The show has since gone onto release three seasons with a fourth on the way.

This dating reality show first premiered back in February 2019 and has since seen two seasons release. In each episode of flirtations and fails, one real-life single navigates five blind dates. The mission: Find one match worthy of a second date.

A Brazillian spin-off called Dating Around: Brazil released in July 2020.

Three versions of Sing On! are available on Netflix so far with the English version hosted by Tituss Burgess seeing contestants competing for $60,000. We’ve also seen two spin-offs for Spain and Germany.

Released in October 2019 weekly, this music competition show set you to find out the next big rap superstar. It was hosted by Tip “T.I.” Harris, Cardi B.

The French iteration of the show was released weekly starting in June 2022 and was hosted by Niska, Shay, and SCH.